On National Pi day I decided to make a Gluten Free Chocolate Chip Pie for the family. Well the pie came out delicious and the kids demanded the leftover pie be their dessert in their school lunches!! So yeah, I think I did well! Deliciously well!

So I had experimented with making doughnuts for the first time ever the other day. I made Gluten Free Apple Cider Doughnuts and while they were awesome in their own right I wanted to dip them in chocolate just to see if they could taste even better. Yeah, it was taste-bud overload!

These Gluten Free Chocolate Crispy Brownies are a welcome addition to any cookie platter, as they’re a great change of pace from your regular cookie fare or brownie fare for that matter. My kids love rice krispies treats and brownies as well so why not put the two together for a divine dessert! 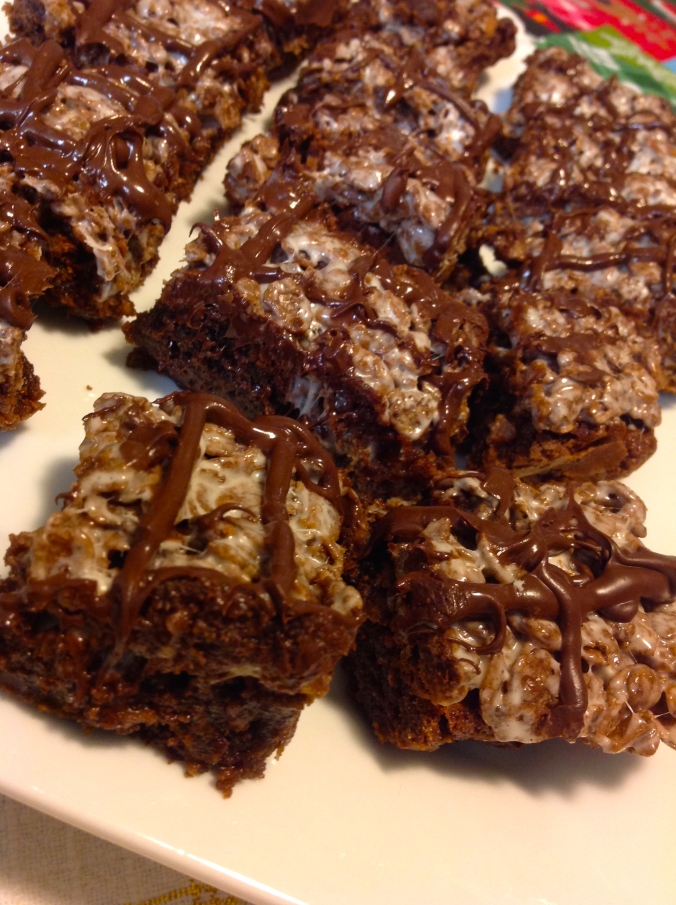 END_OF_DOCUMENT_TOKEN_TO_BE_REPLACED

Yes, I am in a mood where I just want to stuff my face with chocolate and yummy salted food. And what better combo then with Chocolate Drizzled Popcorn!!

Line a baking sheets with parchment paper. Fill the baking sheet with popcorn. Sprinkle with desired amount of dried cranberries and peanuts.

Melt the chocolate in the top half of a double boiler, stirring till smooth and melted. If chocolate is too thick add a little butter to thin it out.

Drizzle chocolate over your popcorn mixture. Place baking sheet in freezer for 5 minutes until chocolate is set.

I can never do something the simple way – I always have to add some flare to my food, like chocolate.

DIRECTIONS
In microwave-safe bowl heat butter and marshmallows on HIGH for 3 minutes, stirring after 2 minutes. Stir until smooth. 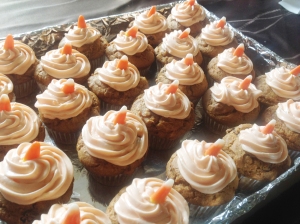 This week has been crazy and it is only Wednesday! I have been swamped with chores galore. I volunteer at my kids school on Wednesdays and Thursdays. I still have laundry on the couch that needs to be folded and dishes in the sink from making halloween party treats for my kids classes. And then, my kids have friday off since it is “Nevada Day.”

Since Nevada became a state (admitted to the Union) on October 31, 1864, and since legislature wanted to celebrate Nevada Day on the “last” Friday in October… Nevada Day falls on the “actual” Oct 31st – therefore my kids do not have school on Halloween this year.

But Nevada day is a big too do this year since the state is celebrating the 150th anniversary of Nevada’s statehood. Thousands come out to the state capital to watch the parade and celebrate. But it is more than just a parade, it is Nevada’s Heritage Celebration, a gathering of community spirit and a salute our state’s past while looking ahead to our state’s future.

Because there isn’t any school on halloween this year, my kids school parties and dress up fall on Thursday (tomorrow) instead.

Having three kids in school – Pre-school, Kindergarten and 2nd Grade… I find myself having to make several food offerings.

My daughter’s class said they are having a breakfast party — so I will be making two dozen Gluten Free Pumpkin Muffins with Cream Cheese Frosting and since it is Halloween, I will throw a few candy corns on top.

My youngest’s class I have to make brownies (Gluten Free of course) to bring in. Not certain if I will top those off with anything. But the Hershey’s Chocolate Spread keeps popping in to my head as a great topper even though I had already put white chocolate chips into the batter. I don’t buy Nutella since my husband and I are allergic to hazelnuts and the Hershey’s Spread are basically similar but one of their flavors is made with almonds instead of hazelnuts. So win!

And then I really got off easy for my older son’s class. Since he can’t partake in having the regular cupcakes all I have to bring in is a Gluten Free Cupcake for him. Score! One less thing for me to make. What I normally do is make a batch of gluten free cupcakes, freeze them in a ziploc bag — and pull them out when needed for a class function — thaw them out over night then all I need to do is frost it right before the kids head off to school. Life is so much simpler that way! 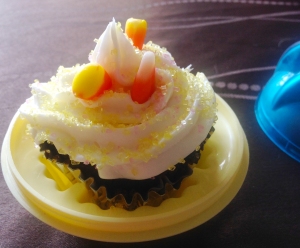 Even though October is on its way out I am still getting zucchini in my garden which is something odd since september is usually the cut off before the freeze hits. Nevertheless, I needed to come up with something different and thought Chocolate Zucchini Bread would be the zing we needed. 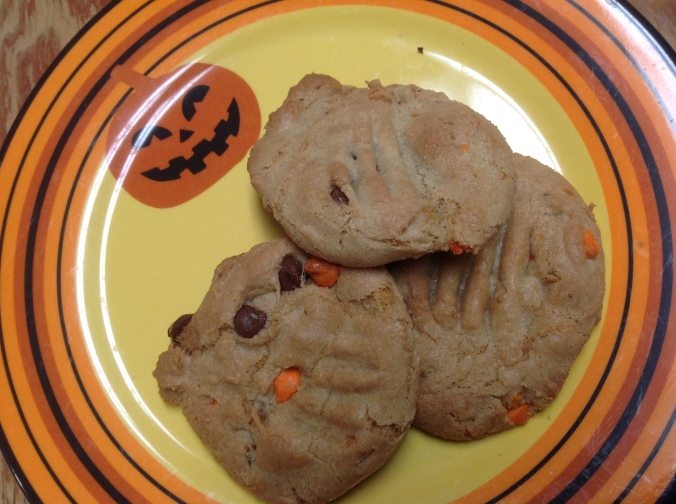 I always have issues with making chocolate chip cookies because of the altitude. Now the challenge is gluten free. But I think I hit on a winning combination that is to please all.

After I came home from volunteering in my older son’s class at school today I made my younger son and I Gluten Free Peanut Butter chocolate chip waffles topped with syrup and plum jelly for lunch.

I had made a waffle for my older son earlier that day because there was a birthday celebration for a classmate that brought waffles as her treat. Of course my kids can’t participate in class treats since most things brought in are riddled with gluten. So I made him a Gluten Free Waffle so he wouldn’t be left out on the celebration.

Well that afternoon, the younger one said he wanted a PB&J sandwich and I suggested a PB&J waffle instead. Sounded like a good idea since I had mix leftover. Why have it go to waste, right?

So I added peanut butter to the mix and then baked the mixture on my belgian waffle maker.

I had never tried Hodgson Mill’s Gluten Free Pancake & Waffle Mix before and was eager to open the package I was graciously given. I couldn’t wait to taste how it turned out especially since it was a Non GMO product as well.

I was happily surprised to see the mix was made with whole grains and didn’t have any sugars or sweeteners added to the ingredients. The waffles I made with this mix were good. A little drier – but probably cause I added a thick peanut butter — and nothing syrup and jelly couldn’t fix. The taste was nice with a slight nutty flavor.  And the texture was perfect, too. Even my kids liked them which was a bonus.

Syrup to taste
Jelly to Taste

Pour into a preheated waffle iron. Bake 6-8 minutes until golden. 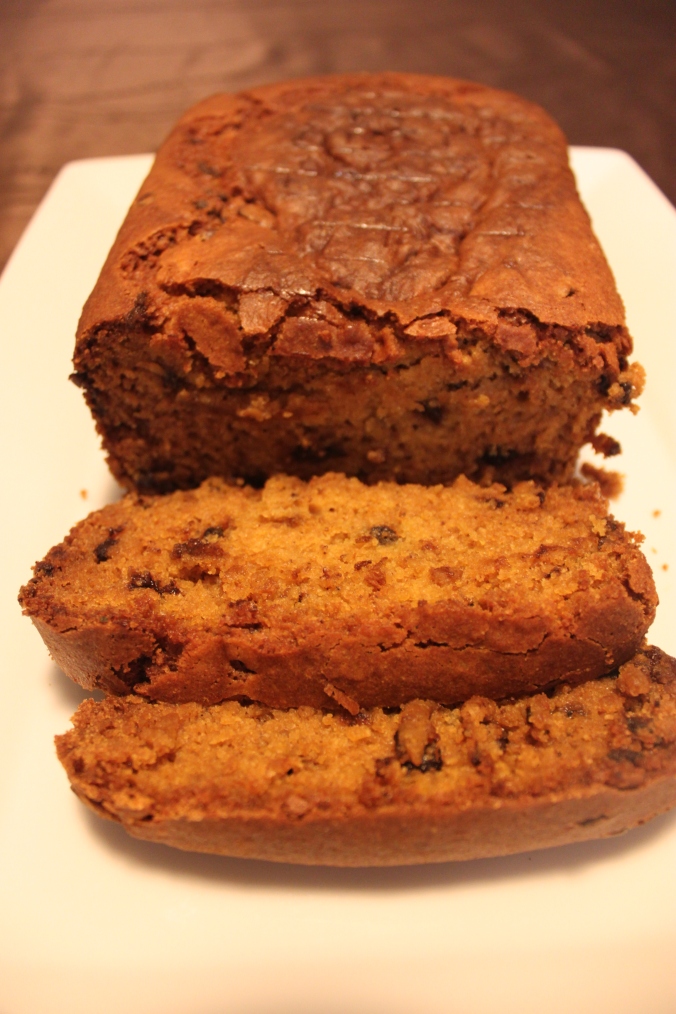 This is a super-moist quick bread packed with flavor especially with mini chocolate chips added.

2) In a large bowl, beat together the oil, sugar, eggs, pumpkin, and water.

4) Spoon the batter into the prepared pans. Sprinklethe tops of the loaves with coarse sparkling sugar, if desired.

5) Bake the bread for 75 minutes, or until a toothpick inserted in the center of the loaf comes out clean; and that same tester inserted about 1/2″ into the top of the loaf doesn’t encounter any totally unbaked batter.

6) Remove the bread from the oven, and cool it on a rack.