In preping for my trip I was reading through pages and pages of Maui travel guides searching many hours away looking at where and what to do via other peoples posts on Pinterest. I even went as far as to borrow Maui travel books from my local library because I love being prepared activity-wise when I am on vacation.

What it didn’t say is that if you grew up in California, you will probably feel like you are in San Diego or Santa Cruz while on the West Shore of Maui though. I won’t lie….. I was a little disappointed with the West Shore of Lahaina for that very fact… that was until we actually started getting out and participating in fun activities. And of course all activities that we wanted to partake in were practically all on the North Shore. Which meant a rental car was a must have.

Of all the days/nights we were in Lahaina, I only visited the beach in front of our hotel once. And that was to see the sunset. At that time I called my kids to say I missed and loved them and that I would see them in a week. From there on out I decided I was going to have fun no matter what and make the best of my vacation.

A couple of days later we went Whale Watching. This is something I have been wanting to do since I was a child so I took the opportunity and ran with it even though we were on the end of Maui’s Whale season.

According to our tour guide humpback whales migrates to Maui from Alaska every October through April to breeding as well as for the females to give birth to their calves. Then the mother and calf stay in Maui’s warm waters for 6-8 weeks until the calves can make the trek back to Alaska.

We not only saw whales on our actual Whale Watching tour but on our Helicopter tour as well. The humpback whales were spectacular and are a must to see if you are planning a trip to Maui. I was told they are every where in February. When I went last week which was around the drop off of the season — we had to look quite hard to find them but they were there and majestic when found.

Next we rented a zodiac boat and traveled to Molokini Island and Maluaka Beach (aka Turtle Town) to go snorkeling. I planned ahead for this trip and purchased a waterproof camera before we headed to Maui so I could capture my underwater adventure! If you aren’t a great diver or have never been snorkeling before a paid snorkeling tour might be easier. Molokini Island is protected from the waves and channel’s powerful currents. However, even experienced divers and snorkelers can get sucked out to the sheer outer drop off of deep black due to the strong currents near the points of the island. So caution and paying attention to where you are drifting is a must. I definitely felt the pull while snorkeling along and ended up kicking hard to get away from being sucked out to the open sea. The next day my quads were definitely sore.

While we were snorkeling Molokini we saw a lot of black triggerfish, some yellow tangs and a parrotfish, however, my favorite was the sea turtle at Maluaka Beach. 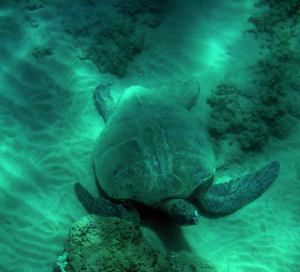 Later that week my husband wanted to drive to the Haleakalā National Park because it is a Volcano crater 10,023 feet above sea level. Haleakalā actually means “house of the sun.”

The day we originally decided to visit Haleakalā  the weather was terrible. It was foggy and really wet and drizzly. You couldn’t see anything past 10 feet in front of you. The drive was over an hour from west maui and quite disappointing due to the low visibility. My husband was determined to see the view and everything else regardless so we made the long car ride on another day to try and catch the sunset once again.

Now on our next try, the weather was perfect. We arrived just a minute or so before sunset and I have to say it was breathtaking and unfortunately I was unable to capture how breathtaking it really was. Don’t get me wrong I took a bazillion photos, but they aren’t like the one I personally witnessed with my own eyes. 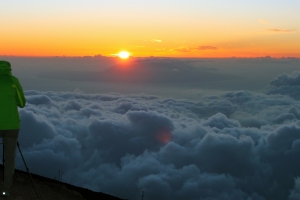 Then we waited for night fall so we could see the stars. There seemed liked millions of them dancing in the sky that night which of course I was unable to capture at all with my camera. But take my word for it, it was a spectacular sight even though it was extremely cold. Everyone knows that Maui is warm yet very humid, HOWEVER, Maui at 10,000+ feet high is extremely cold at night – so if you plan on driving to see the volcano’s view of the ultimate sunset — BRING A JACKET to keep you warm!

Next we took a Helicopter tour through Blue Hawaiian Helicopters’ West Maui Mountains tour. It was a 45 minute tour and we were able to see the cliffs and waterfalls in all their splendor. 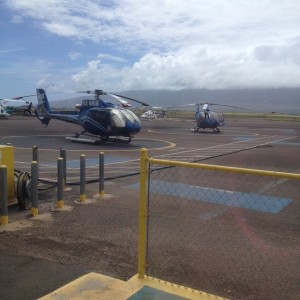 This flight took us through one valley after the next exposing us to ridges and peaks as well as beautiful waterfalls cascading from towering cliffs into streams that ran along the rainforest floor. 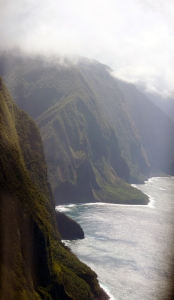 As an added bonus, coming back across the ocean we saw a mother humpback whale and her calf playing in the water below us. A sky view was more entertaining than our boat tour was for sure when it came to seeing the whales.

Our last day in Maui we went on a very hard hike on the north shore. LOL, we should had just got a hotel on the North Shore since we spent so much time on that side. Anyhow, the trail was called Waihee Ridge Trail. It was a tedious hike up a steep grade which I sweated a gallon and pretty much gave up after a mile cause I knew if I pushed myself any harder I would get a migraine. Nevertheless, the view was awesome and the flowers were pretty along the walking paths. 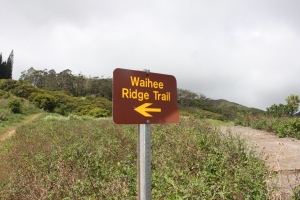 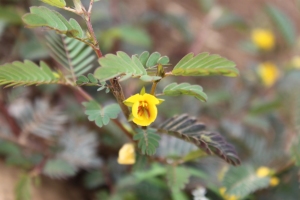 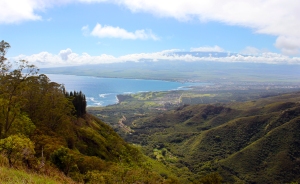 After the hike we spent almost 18 hours sitting in either the airports or on the plane. It was a total pain in the butt getting home. And basically took three days to really recoup from the massive jet lag that came with it.

All in all, my husband and I had a good time.

One thought on “My travels to Maui, Hawaii”